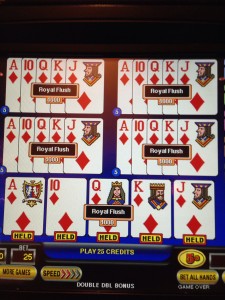 Chances of hitting a royal flush

The odds are once in every 40,000 hands over the long term. For the average player to figure out how often he should hit a royal flush, we need to know something about his actual play.

If you play a fast video poker game of 500 hands per hour it will take approximately 80 hours of play to reach 40,000 hands. At four hours per day it would take 20 days to achieve this mark. That means 20 One day trips.

Most people are unaware of how much it takes to achieve 40,000 hands and there’s still no guarantee that you will hit a royal flush in 40,000 hands. Remember that this is the average and you could go as much is 80,000 or 140 thousand hands before hitting a rough flush several times.

If you are a regular video poker player, keep track of the number of hands you play on average per hour and how long you play. This will give you some idea of how often you should expect to hit a royal flush based on the 40,000 hand rule. Remember to keep in mind that it could go much higher than 40,000 hands.