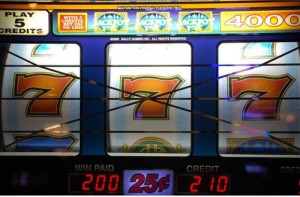 How many times have you found credits left in a slot machine? It has happened to many of us and we all wonder what we should do. When you stop to think about it there is an answer to the question and it is really quite simple. The money is not yours and you should not spend it, take it or gamble with it. In 99% of the cases most casino patrons will realize that they have left their money in the slot machine and will come back for it. You really do not want to be embarrassed and have casino security demanding that you repay the forgetful player.

Credits left in a Slot Machine – Why?

If it is a small amount, let’s say a couple of dollars at the most, no one is going to worry too much about it. If it is more than that then you should take a few steps to protect yourself from embarrassment or worse. Why you ask? Here is what could happen and actually did happen to a friend of ours.

She found $87 in credits left in a slot machine one day. She waited for 5 or 10 minutes and when no one came to claim the credits she pressed the cash out button and received the slot ticket. Once she had the ticket, She then played her own money in that slot machine. After 30 minutes or so, she decided to move to another slot machine and wandered around the casino, in fact going to the other end, still with the $87 slot ticket in her purse.

A short while later a security guard approached her and asked if she had the ticket. The original player finally remembered, went back to the slot machine and found no credits in the machine. She then went to security who pulled up the video, saw our friend remove the money and then followed her around the casino until a security guard could physically track her down.

She naturally gave up the ticket, but what if she had spent the money or worse denied the claim. Now she would be pulled into the security offices and a possible charge levied against her. No one wants that. So the moral of the story is, do not spend the credits left in a slot machine. Someone will remember and security will track you down.